Son of the River

The path we shall cut through our enemies, uprooted and swept aside like albrati shrubs in torrential Akhet – they will be powerless before it. My river, Al-Kawthar, it is mine as I am hers.

So… gather subjects, for the charting of the river’s course demands one knows the ways of the headwaters.

Your pharaoh was born along the shores of the Al-Kawthar river during mid Peret, the bounty of life growing around me. Born was Ito fishers of the river, small people that gave up their toil and bounty to a smaller man who did not move, but ate dried dates as he watched invaders rob the valley for their “War of Light”. The stars, the mouths of men and the land itself said I would do the same…o but I listened to the Al-Kawthar, and she said she wanted to be UNLEASHED.

I looked upon those who birthed me, the unearned tributes would never reach that man who could not even hold what was given. I looked down on their red ruin as I fed upon the wealth of our labors and I felt the strength of the river fill me. I would not be bound to the banks of this existence; I would burst forth and make this land mine. So I left that place and journeyed upriver to another place ruled another weak man and joined his army. In time I told him of the wealth of my homeland and how I could lead them past its defenses – his greed loosened his grip upon those men and I took them into my own. Many died, but in the end – one weak man lay dead and another sat alone watching a strong man crowned before his own army marched upon him.

For years, I held as tight a grip upon the wealth of the people as I could. When the “crusaders” came, I made them pry the tribute from my hands. I turned my armies upon our neighbors and liberated them from softness and greed. I told the fishers and growers to feed their boys well and the only tribute I wanted was the strength to defend our valley and our river. We would choke the trade of those around us, where they seek to do the same we would break their grip, and when they were weak we would take them and make strong. Al-Kawthar, for we were the river, we grew stronger and a dozen tribes and kingdoms had fallen and been reborn of our flesh. Perhaps fifteen years from now, with ten thousand beside me, I will tell the Dragon Host that we will no longer allow them to rob us.

I had never seen water burn before that – for three days I fought beside them as our blood feel like rain. The stones of the city crumbled alongside our bones, but the Black Pharaoh would not yield. I remember as one of the metal clad men lay crushed and gasping around the metal of my crook, his teeth splinters, I saw I silver light glow upon him. Reflected off that dented metal, the strength flooding me, and I saw the armies of the Celestials ebb away beyond sight. I was foolish enough to think I’d won, twenty of mine dead for each of theirs, it was just the calm before my own personal torment.

It was not men that came next to that broken battlefield, but the gods of the sky. They whispered in my sleep and came to me in my waking to take me away. I refused them, I had my kingdom, I would not be led away or taken from my countrymen for some other war or promise. So they wrapped me in their glamours and delusions and bent my mind till I knew not my own voice and I found that I had left my river. The banks of reality rapidly seeking to lock me again to the will of the stars – but I heard the voice of another that offered me the possibility, of breaking free again…of finding my river and my people. 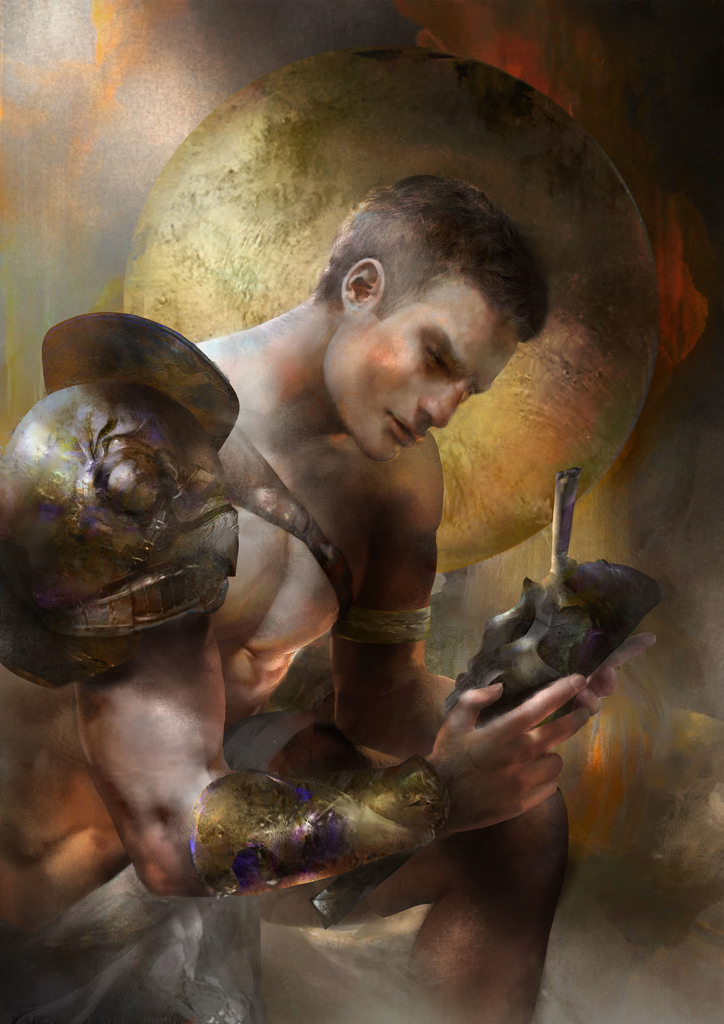